Birthday wishes for Granddaughter No:4

It's our granddaughter Lacey's birthday on the 1st March and I hope she likes it.  I like the two little star fish with their black beady eyes. These were little star buttons I found in my stash but the one on the left hasn't got it's eyes lined up straight, never mind. 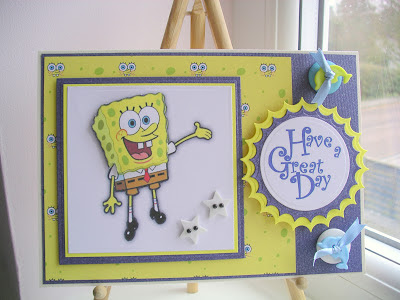 It's time for another challenge over at the OSAAT challenge blog and this time it is " Digi Or Don't" The choice is entirely yours.  Our super sponsor this week is:  There's a £10 voucher to win to spend in Joanna's fabulous website.

My choice for this weeks challenge is a gorgeous sentiment and flower designed April of Reeces Scrap Pieces and you can find it here in Stitchy Bear's shop.  It's called "Missing You" and I think we can all relate to this beautiful sentiment.

I used a piece of my all time favourite paper pad called Ella Blue by GDC and reversed the paper for the dark brown area.  It is decorated it with just ivory ribbon and a computer generated sentiment that has been cut with a Spellbinders die. 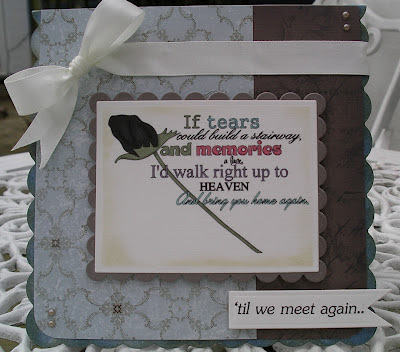 Oops! I had forgotten the Birthday of one of my Red Hat friends so put together this super quick card from another Hunkydory kit that was free with a magazine.  I like those !!!!

Just added a blue Spellbinders square mat, a couple of pearls and a floppy bow and job done! 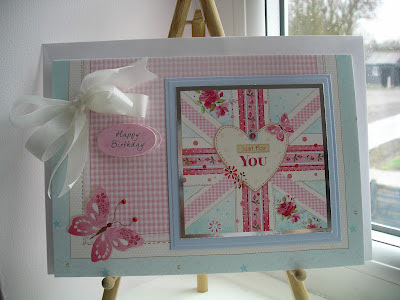 A really quick Kanban kit card today, I had to get this done by today, just added some feathers and ribbon from stash. 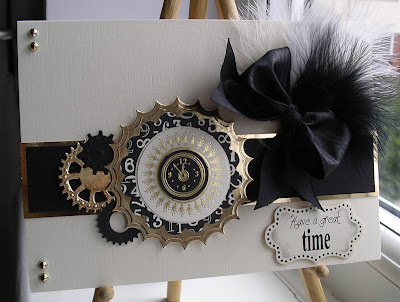 It was my great niece's 1st birthday back in January and when I saw her at Christmas she was just starting to walk.  The image is from Mo's Digital Pencil and it is called Walker and reminds me so much of Christmas especially as Megan was wearing such pretty red shoes. 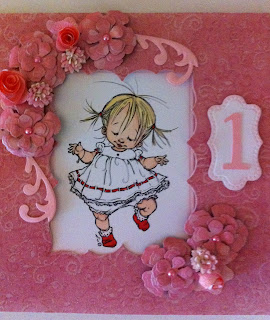 The front of the card has been cut out with a Spellbinders Labels 23. The flowers I cut with Spellbinders Rose Creations, Marianne's English Rose and I've added some Wild Orchid flowers from my stash.  I covered most of the flowers with a glaze to make them shine. The pink embossed paper is from First Editions Sweet Owl.

It's one of our gorgeous granddaughters, Lucy, whose birthday is next week and this is her card.  She is so grown up at eight years old that thought her card should match.  The image is her birth sign fairy from the Enchanted CD by the artist, Linda Ravenscroft.  It has such beautiful images on the CD  I just matted and layered it onto gold and pink pearlised card and just added some Wild Orchid flowers and a Craftwork Cards sentiment.  Loads of glitter added to the fairy's wings too. 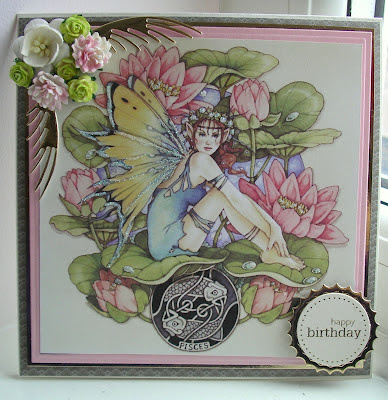 I'd like to enter this card into the following:-

Day 6 of My Own Challenge

Made it to day 6, wow!  This is one of the cards I made for my US Red Hatters Card Swap.  As the postage to the States gets more and more expensive I've decided to stick with a digital card making.  As I now am back up to 15 makes per month for this swap it's a lot easier to print out, cut and fold all of them.  Our theme for this month's swap was hearts.  The digi kit came from the Daisie Company and is called Be Sweet ~ Love Letters and was designed by Gina Jane. 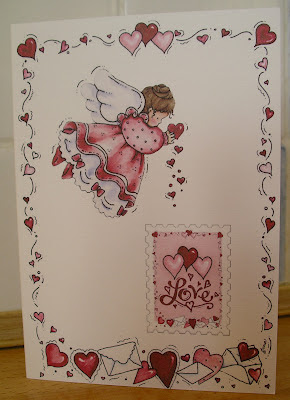 Day 5 of my own challenge

I should have posted this last night but I was so angry at reading on Faceache (Facebook for those that don't know me!) something that I thought I would have been told about, but no, it was plastered all over that anti-social site.

Grrrrh!!  I am seriously considering pulling out of it altogether, do I need it, no, I don't think so!  Rant over!

My little grandaughter Bea has a fracture in her arm so I'm sending this off today to her.  The background paper is from First Editions New Leaf and the House Mouse 'Monica with Blankey' is a real favourite of mine. 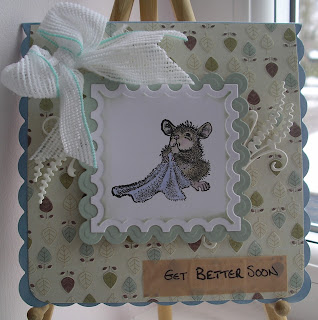 The bow is made from bandage and the sentiment is written on a plaster, thank you Joanna Sheen for the inspiration. I've added a couple of flourishes from Marianne Designs.
Posted by Jennie - The Crafty Wife at 09:56 5 comments:

Day 4 My Own Challenge to Me

This is another kit card from Kanban and for the life of me I can't remember which one.  I just put this one together quickly for my fab sis-in-law who's just moved to a new house. Just an odd piece of coffee coloured gold foil and a Spellbinders ribbon tag under the sentiment.  A few pearls to finish, I'm quite pleased with this. I just love the colour.... and the look of that piece of cake.

BTW, it was chocolate cake today made by Kitty.  OH was over the moon. 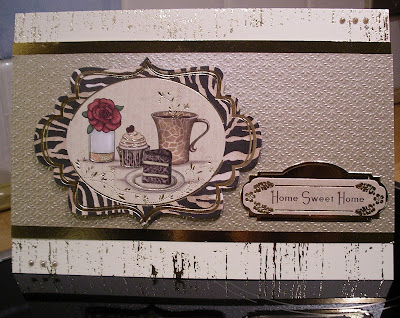 Day 3 of My Own Challenge

In the nick of time I remembered I had to post a card again today.  Here 's today's card I've made for my birthday twin.  I've wanted to use more of the lovely LOTV images (I've got loads!) I've used another paper from the gorgeous Isabelle from First Edition.  The little parchment flowers are made from a Marianne die called English Roses and I used a Spellbinders leaf die. 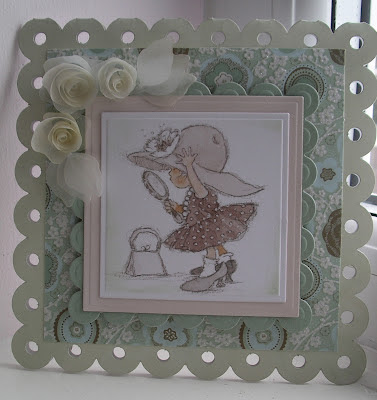 Eureka!  I found the  picture, it was still in the camera! Doh!

Birthday Card for One of my Boys ~ Card No: 2

How times flies!  I cant believe that it's my youngest son's birthday again,.  I bought some Kanabn McKenzie bits just before Christmas and now I have time on my hands for a few weeks I thought I'd give it an airing.  I liked the colours of black and cream and used my Spellbinders Sprockets to cut some extra embellishments.  I don't often make kit cards but this one is growing on me. Hmm! I wonder if I could set myself a challenge and make a card a day?  Well I suppose this is really card no: 2  Can I get away with the DT from yesterday as !being no: 1? Well... it is my challenge. 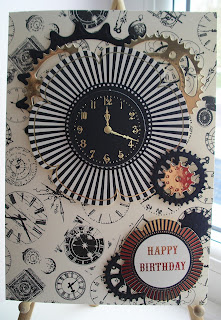 Our Design Team challenge this week was 'With Love'.  Hopefully to inspire those magical cards for Valentine Day next week.  I chose an Ikes Art digi called Shelf Cat that you can see here. Now that is one loved-up cat!

The background paper is a piece of the beautiful First Edition pad called Isabelle that I bought before Christmas, it is full of lovely pale greens, pinks and browns.  A few flowers and a couple of Spellbinders tags with a couple of Marianne Designs  flowers to finish.  "I Wuv You" I think came from a T-shirt that the character of Alice wore in the 'Vicar of Dibley'. 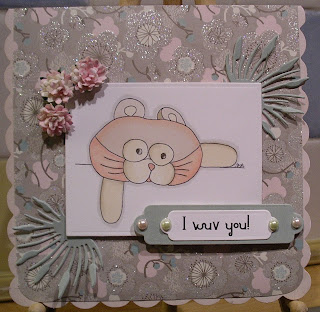 I would like to enter this card into the following: 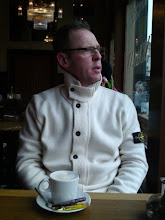 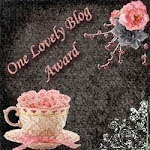 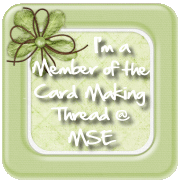 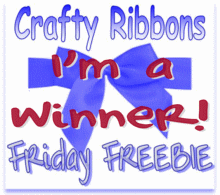 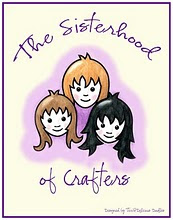